A painting - A story 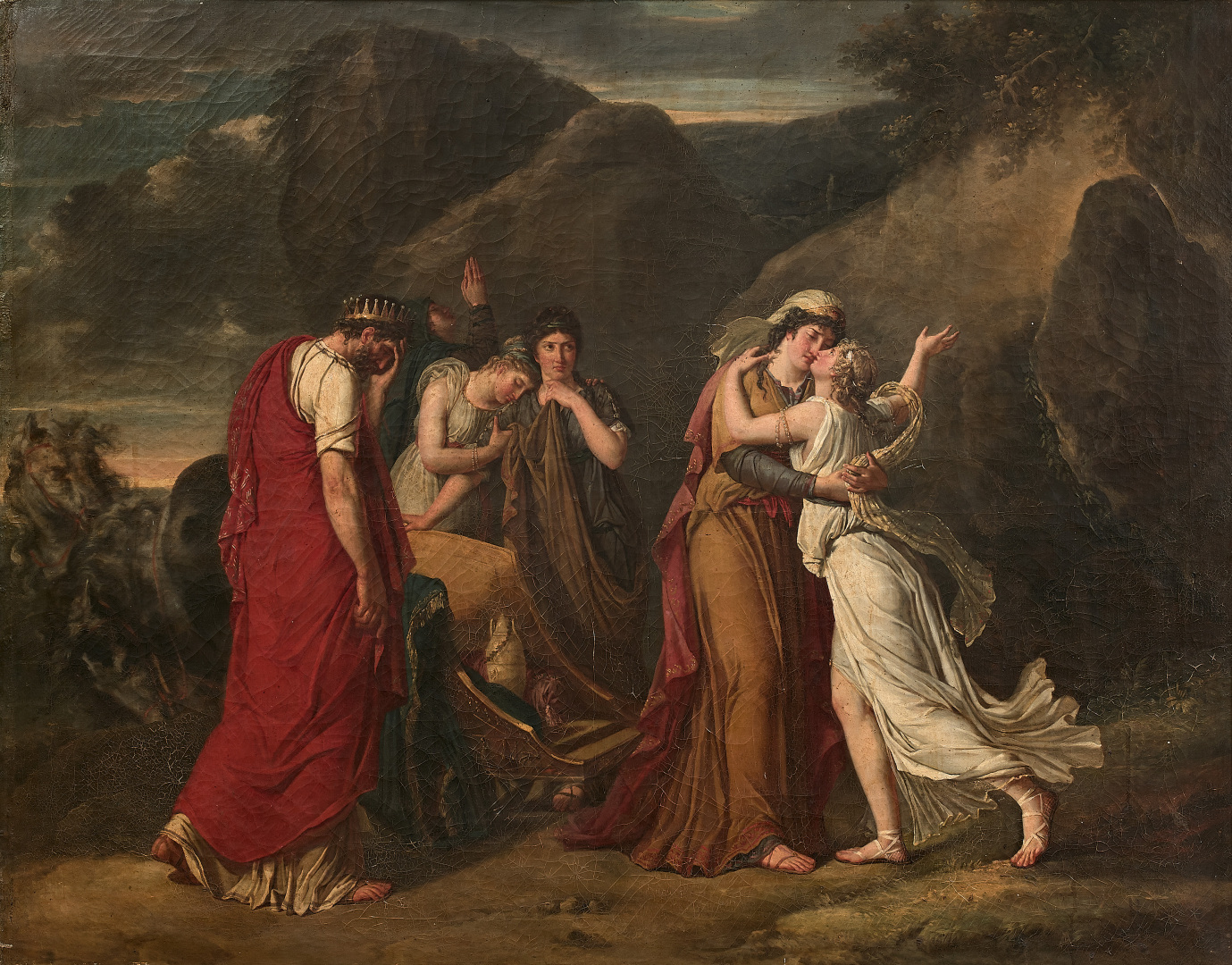 Our painting is the one that Mademoiselle Laville (better known by her married name Marie - Guillemine Benoist) exhibited at the Salon of 1791.


The story of Psyche is a subject taken from the Golden Donkey, or the Metamorphoses of Apuleius.

Psyche was the king’s most beautiful daughter, so beautiful that no one dared to marry her. This worship close to the cult wrath Aphrodite, goddess of beauty known for her jealousy. The goddess charges her son, Love to avenge her by touching the beautiful Psyche with one of her arrows so that she falls in love with a despicable mortal. Sadly, Love himself falls in love with the beautiful Psyche and then advises his father, via an oracle, to abandon Psyche on a rock so that it can be removed by a horrible monster.

It’s actually Zephyr who takes it off and deposits it in a sumptuous palace where invisible maidservants respond to Psyche’s every wish. Every night, Love / Eros visits her and leaves her at dawn. Piqued with curiosity exacerbated by her sisters, Psyche nevertheless ends up looking to see her lover's face but a drop of oil escapes from her lamp when she discovers Eros asleep. Eros awakened by pain, flees immediately.

Desperate, Psyche then seeks to throw herself into a river, but she meets the god Pan there, who suggests that she reconquer Eros. Aphrodite then instructs Worry and Sadness to subject Psyche to tests: to sort a pile of grain, to bring sheep's wool to the Golden Fleece in Aphrodite, to bring back water from the Styx, to lock up a little of the beauty of Persephone in a box. In each of these trials, she will be helped by compassionate characters: ants, a reed, Zeus himself, a tower. Always curious, Psyche however did not resist the temptation to look at the beauty of Persephone and immediately fell into a deep sleep.

Eros, meanwhile healed from his injury, cannot forget his beautiful Psyche and sets off to find him. It was he who revived her with the tip of an arrow, then took her to Olympia where Zeus officially announced their wedding and invited Psyche to drink ambrosia, thus offering him immortality.

Psyche and Eros will give birth to Hédoné, Plaisir.


Rediscovering the history of Psyche and figuration.

Psyche means in Greek soul but also butterfly. Among the Greeks, the soul of the dead leaving the body was symbolized in the form of a butterfly. We often read in the story of Psyche's love and Love the adventures of the human soul. The rise of Psyche in Olympus will allow, for example, the use and rereading of the theme by early Christian art.

The history of Psyche is a great success and is found in filigree in the arts through the centuries, particularly from the 16th century: the stained glass windows of Ecouen, today preserved in Chantilly, as does the novel by La Fountain published in 1669, the discovery of Pompeii in 1749 reveals frescoes depicting Psyche.

The greatest painters figure the subject, often with a predilection for the scene of Psyche discovering sleeping Love, or Psyche revived by the kiss of Love. This is the case of Simon Vouet, François Bouchet and again Charles Joseph Natoire.

At the beginning of the XIXth century, a new translation of the Golden Donkey of Apuleius was published and the theme took on more importance, illustrated this time by Prud’hon ,, Ruthxhiel, and of course Canova and David.

Light on Marie-Guillemine Benoist, painter of the farewells of Psyche to her family.

Woman painter, on horseback between two centuries, Marie Guillemine Benoist (1768-1826) was highlighted in particular during the exhibition on "The black model" at the Musée d'Orsay in 2019 with her Portrait of black woman, exhibited at Salon of 1800 and one of the most famous works in the Louvre since its acquisition in 1818.


Born into a family of the Paris administration, sensitive to the Arts, she returned in 1781 to the studio of Elisabeth Vigée - Lebrun. She also exhibited at that time some portraits in pastel or oil. It was in 1786 that she and her sister, also a painter, returned to the studio of Jacques Louis David. At the time, he was the artist who changed the course of painting. She will study the history, the composition and the drawing, the strength of the characters. It was the time of Bélisaire, the first true neoclassical manifesto.

She exhibited in 1791; three paintings that show the diversity of its culture. Under number 194, a Scene from Clarisse Harlowe, the fashionable novel by Samuel Richardson published in 1748. Coming from an enriched family seeking to rise on the social ladder, Clarissa Harlowe was forced by her parents to marry an aristocrat. She fled with the libertine Lovelace who seduced her. After many adventures and misfortunes, the girl dies. His virtue is recognized by all. Lovelace lets himself be killed in a duel.

Finally, she also exhibits Les Adieux de Psyché to her family. The subject was inspired by the artist by Charles Albert Demoustier (Villers - Coterêts 1760 - Paris 1801) a poet and playwright with whom she maintained a romantic relationship for ten years. A lawyer for a while, Demoustier made himself famous with poetry lovers by Letters to Emilie on mythology in six volumes, written and published between 1786 and 1798. Several times reprinted, these letters supposed to teach mythology to a young woman, are rather considered love letters from the poet to a young student painter, whose identity is barely veiled under the pseudonym of Emilie. As soon as the first volume appeared in 1786, it was recognized that it was Marie-Guillemine Laville - Leroux.

It was under the influence of Demoustier that Marie-Guillemine painted this picture, drawing on the subject of Psyche in Letters LII to LVII. Demoustier refused to marry the young woman.


Vivian P. Cameron, (Opus cited above), cites a preparatory drawing for our painting.


The painting was very appreciated by the critics ("I did not think of a woman capable of such a historical composition, which is moreover with this degree of perfection. How everything is speaking in your table! How your figure of Psyche is beautiful and interesting ! "(La Béquille de Voltaire at the Salon, Paris, 1791, Deloynes Collection, n ° 148, p.422). Note, however, the artist's courage in exhibiting at the Salon in the midst of a revolution, a painting describing the courage of a woman.


In 1793, the painter married the royalist lawyer Pierre Vincent Benoist, and then left Paris, then exhibited again at the Salon of 1795 and moved away from historical painting in favor of portraits. Her famous Portrait of a negress greatly contributes to her current notoriety. But it was the official portraits that contributed to his success at the time; a Portrait of Napoleon (Ghent Palace of Justice), and others painted for the cities of Brest, Le Mans or Angers. The accession to the throne of Louis XVIII and the promotion of her husband to the title of State Councilor definitively distanced the artist from the brushes.

Psyche, the myth in the collections of the Château de Chantilly, a program by Canal Académie, the radio of the academies and the Institut de France.

Read or re-read the article in the Gazette Drouot on the fabulous painting by Marie Guillemine Benoist.

Fine art on the portrait of a black woman. 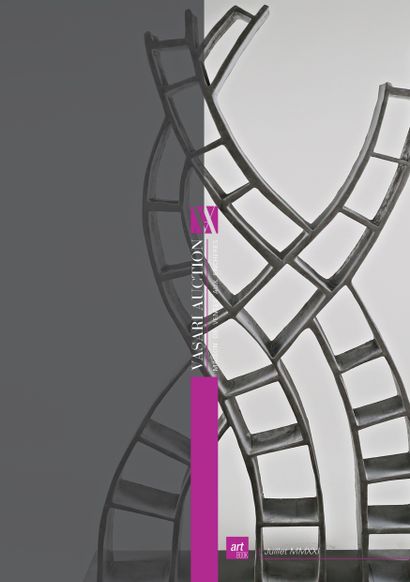 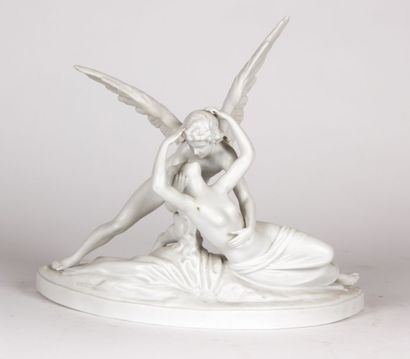 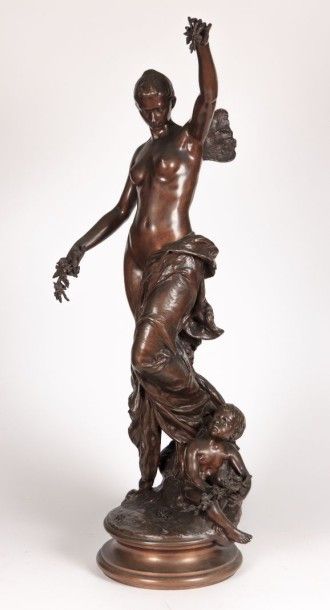 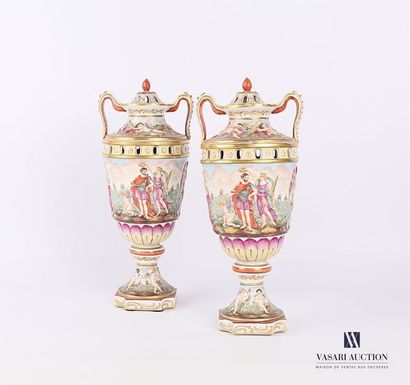 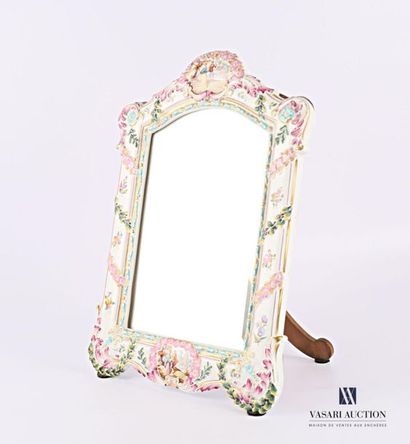